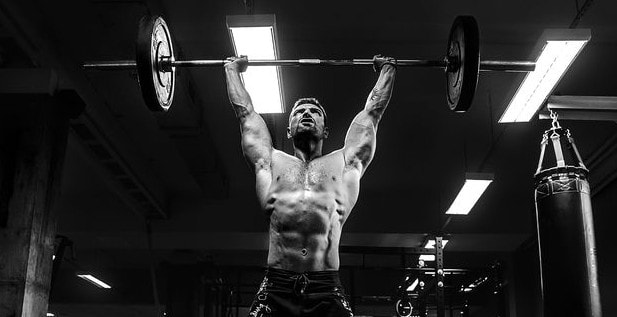 How long does it take to lose muscle when you stop training? Will it take a few weeks before lockdown-induced muscle shrinkage starts to kick in? Or are you going to lose size faster than Superman losing his powers whenever a chunk of kryptonite shows up?

To answer that question, researchers from Baylor University rounded up a group of men, all of whom had been lifting weights for at least a year, and put them on an upper/lower split routine for a total of four weeks [1].

Then, the men took two weeks off.

How Two Weeks of No Training Affects Your Gains

Despite the two-week break, the men didn’t lose any muscle. Ultrasound scans of rectus femoris – one of the muscles in the front of your thigh – taken before and after the layoff, show that no muscle was lost.

It was much the same story when it comes to strength. After the two-week detraining period, the men could lift just as much weight on the leg press as they could before the layoff.

So, does that mean you can take at least two weeks off training, secure in the knowledge that all of your hard-won muscle will remain intact?

Not necessarily. And here’s why.

First, this study measured muscle size in rectus femoris, which is just one of the four muscles making up the quadriceps. We may well have seen some shrinkage had the researchers looked at other muscles in the thigh.

Given that your quads are used in normal daily life, it’s possible that simply standing up, sitting down and walking around delivers a sufficient maintenance stimulus to keep things ticking over, at least for a couple of weeks [2].

Other research on the subject does show a degree of muscle loss in the thighs after a period of detraining, which clocked in at roughly 0.1% per day [3].

What’s more, studies to look at how detraining affects muscles in the upper body, specifically the pecs and triceps, do show that some muscle is lost during a three-week layoff [4].

The good news is that any lost muscle tends to be regained relatively quickly when you start lifting weights again.

There was an interesting study published back in 2011, where Japanese researchers looked at how a three-week layoff affects gains in muscle size and strength [5].

They took two groups of men, and put them on a 15-week bench press training program. The first group trained continuously for the entire 15-week period, while group two trained for six weeks, took three weeks off, then resumed training for a further six weeks.

You’d expect subjects in the continuous group to have seen the best results. But that isn’t what happened. By the end of the study, there was no significant difference in terms of size and strength gains between the two groups.

Subjects who took a three-week break from training did see their muscles get smaller during the layoff. The average decrease in triceps size was 2.2%, while the pecs shrunk by 5.7%.

However, when they started training again, their muscles responded much more quickly compared to the continuous group. As a result, both groups finished the study having gained roughly the same amount of muscle.

A similar study, this time lasting 24 weeks rather than 15, found much the same thing [6].

Muscle was lost during both of the three-week layoffs. During the first and second detraining periods, the decrease in triceps size was 2.6% and 2.9%, respectively.

But once again, the detraining group made faster gains when they returned to the gym. This meant they were able to catch up with subjects in the continuous training group. 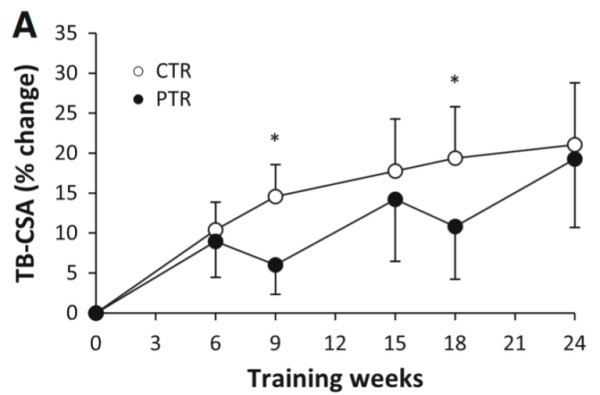 Strength levels also took a dip during the layoff, but returned quickly when training resumed.

The figure below shows changes in muscle strength during the 24-week training program. The black dots show how strength changed in the layoff group, while the white dots show the results of the group who trained continuously. 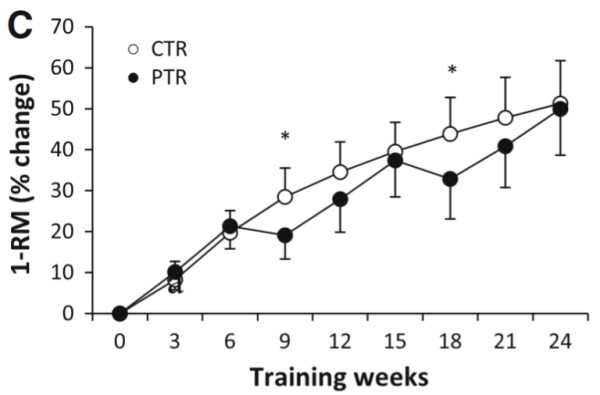 In the end, both groups made similar gains in size and strength, despite the fact that the detraining/retraining group did 25% fewer workouts.

So, why does rebuilding lost muscle tend to happen more quickly than gaining it in the first place?

Why Lost Muscle Comes Back Faster

First, a reduction in muscle size doesn’t necessarily mean that you’re losing muscle protein. That’s because there’s a lot more than just protein inside your muscles. You’ll also find carbohydrate in the form of glycogen, fat stored both in and between muscle fibers, as well as water.

Detraining leads to a reduction in the amount of glycogen stored inside your muscles [7]. Because glycogen binds around three times its weight in water, any reduction in muscle glycogen will mean that the fluid content of a muscle also declines.

As a result, your muscles will look smaller, taking on a slightly “deflated” appearance [8].

Given the fact that some of the material stored in your muscles has been lost, we could say that you’ve lost muscle. But all that’s happened is that your muscles have flattened out a bit because there’s not as much “stuff” in there as there was before.

In other words, not all of the reduction in size will come from the loss of contractile proteins inside a muscle. A big part of the reason your muscles look smaller during a layoff is because of the loss of muscle glycogen and water, which are quickly replaced when you resume training.

Muscle memory also plays a role, especially if you have a few years of serious lifting behind you.

When your muscles grow, they develop more nuclei – the “command centers” of a muscle cell that control what goes on inside that cell. However, those nuclei aren’t lost when you take a break. Instead, they hang around inside your muscles, which allows for a faster rate of growth when you start training again.

From Lawrence Schwartz, Professor of Biology at the University of Massachusetts:

“Muscles get damaged during extreme exercise, and often have to weather changes in food availability and other environmental factors that lead to atrophy. They wouldn’t last very long giving up their nuclei in response to every one of these insults.

“Since myonuclei are the synthetic engine of muscle fibers, retaining them should enable muscle size and strength to recover more quickly after one of these insults, and help to explain the phenomenon of muscle memory.”

Finally, it takes less training to maintain the muscle you already have than it takes to build more.

In one study, subjects who reduced both the number of weekly training sessions, as well as the number of sets per exercise, from three down to just one, were able to maintain most of the muscle they’d built [9].

In fact, a simple three-day full-body workout, involving one set per exercise and lasting just 13 minutes, has been shown to generate a small but significant amount of muscle growth [10].

While building muscle as fast as humanly possible is likely to require a higher volume of training, just keeping things ticking over takes a lot less work.

So, what’s the bottom line?

Taking a few weeks off won’t seriously derail your progress. While detraining is likely to lead to some muscle loss, particularly in the upper body, it’ll be regained quickly once you get back in the gym. And it’s still possible to maintain most, if not all, of the muscle you’ve built with a relatively small amount of training.