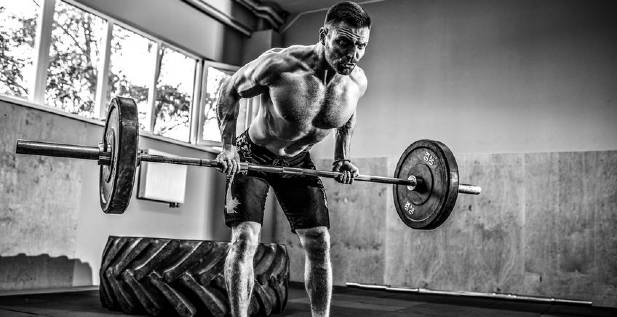 Every day, millions of people ask Google some of life’s most pressing questions, big and small. And I’ve taken it upon myself to provide you with the answers.

Today, I tackle seven of the most popular questions on the subject of full body workouts, muscle growth and fat loss.

Some say that full body workouts are really only effective for beginners. Once you’ve graduated from the novice stages of training, you’re better off with a split routine, where you work different muscle groups on different days of the week.

However, full body workouts can be a surprisingly effective way to gain muscle, even if you’re no longer a beginner.

Probably the most relevant study on the subject compared training a muscle once a week with a full body workout performed five times a week, Monday to Friday [1].

This meant that both groups did the same number of sets for each muscle group, but it was spread out differently across the week.

After two months, there were no significant differences in terms of strength or size gains between the two groups – 10-15 sets distributed over the course of five days increased muscle mass and strength similarly to the same number of sets performed once a week.

What’s more, if you look at how people trained before drug use was as widespread as it is today, full body workouts were extremely popular with the top bodybuilders of the time.

“Some of the younger bodybuilders were into split routines and all kinds of crazy sets, reps, and novelty routines,” says Ben Sorenson, the manager of Vic Tanny’s Gym in the late 1940’s, which back then was the largest bodybuilding facility in the world.

In short, there’s no reason to ditch full body workouts and move to a split routine just because you’ve got a few years of serious training behind you.

As long as your training program is set up properly, intermediate and advanced trainees can still make good progress with the use of full body workouts.

2. Can You Do a Full Body Workout Every Day?

To a lot of people, the idea of doing a full body workout every day sounds completely outrageous.

The standard advice is to take at least one complete day of rest between training sessions that work the same muscle groups. Training a muscle group seven days a week doesn’t give you enough recovery time, and is just going to wreck your joints, beat up the CNS and make your muscles shrink.

However, while I don’t think you should be doing a full body workout every day, there is some research to show that training the same muscles 4-6 days a week is not as crazy as was once believed.

A few years back, researchers from the University of South Florida compared two programs that involved training three or six days per week [2].

Subjects taking part in the study were young men in their early twenties, who’d been lifting weights for at least six months.

The men were split into two groups, and trained either three or six days per week. The amount of training performed by both groups was identical, but was spread out differently.

At the end of the study, there was no statistically significant difference in strength or size gains between the two groups. Men in both the 3-day and 6-day groups gained roughly the same amount of muscle.

To sum up, there’s nothing inherently wrong with performing a full body workout 4-6 times a week.

Do I think it’s the best approach for everyone? No.

If you’re just starting out, you’re better off with something like a full body workout performed three days a week, or an upper/lower split, where each muscle group is trained twice a week.

A high-frequency full body workout is best reserved for someone with several years of lifting behind them. And even then, you’ll need to be careful not to push things too hard, too fast.

You can’t just take a typical 5×5 workout, where you’re doing multiple heavy sets of bench presses, squats and deadlifts, and try to do it every day. That’s not going to work

A full body workout performed 4-5 times a week would need to be set up specifically for that purpose, with the volume and intensity of each training session adjusted to take into account the increase in training frequency.

3. What Is the Best Full Body Workout?

Same story if you’re in your forties, and your joints are not what they once were. A full body workout is going to look very different now than it did when you were in your twenties.

However, there are a few characteristics that all the best full body workouts have in common, which I talk more about in the link below:

4. How Long Should a Full Body Workout Be?

There are no hard and fast rules about how long a full body workout should last. But for most people, it’s going to take somewhere between 45 and 90 minutes to deliver a sufficient growth stimulus to all the major muscles in your body.

Can you get an effective full body workout done and dusted in less than 45 minutes? Yes.

Is it a problem if your workout happens to last longer than 90 minutes? No.

Despite claims to the contrary, it’s not like you reach some kind of catabolic tipping point as soon as your workout hits the 90-minute mark. Training sessions geared towards maximizing strength, for example, can last a long time simply because of the extended periods of rest between sets.

But in most cases, a full body workout lasting 45 to 90 minutes is plenty. That’s more than enough to get the job done.

If you only have the time (or the inclination) to train twice a week, you can build muscle and get stronger with just two full body workouts each week.

However, there are some downsides to consider.

If you’re someone who needs a relatively large number of sets to stimulate growth, trying to compress all that work into just two workouts means that each training session can drag on.

You end up running out of steam, and the muscles being trained at the end of the workout tend to grow more slowly than they otherwise would do. If you’re trying to maximize muscle growth across your whole body, I think you’re better off with 3-5 training days each week.

But for everyone else, a full body workout performed twice a week is a surprisingly effective way to gain size, just as long as you’re prepared to work hard and push yourself.

Multi-joint exercises like the squat, lat pulldown and deadlift involve lifting relatively heavy weights, and require a lot of work from the large muscle groups in your legs, hips and back.

But if you’re wondering whether this or that type of workout burns more fat, you’re focusing on the wrong thing.

When it comes to getting lean, the food you eat (or, more importantly, that you don’t eat) is a lot more important than what you do in the gym. Think of your diet as a way to get rid of the fat, and your training sessions as a way to gain, or even just retain, muscle.

Although fat will be burned as a side effect of doing the work necessary to send the “size and strength” stimulus to your muscles, it’s not the end goal in itself.

Brad Pilon, author of Eat Stop Eat, once came up with an interesting thought experiment on this very subject.

“I want you to STOP thinking about exercise as a way to burn calories and lose fat. Stop it. In fact, I want you to pretend that it’s not even possible, that somehow workouts don’t burn any calories at all.

“Think of your workouts as a way to build or maintain your muscle, and think of your diet as how you lose body fat and maintain low (but healthy) levels of body fat.

“That’s it. No cross over. Because from my experience that’s when the trouble sets in. Mindlessly killing yourself in the gym to burn fat, then purposefully overeating to ‘feed the machine’. This becomes a vicious cycle of doing a LOT of HARD work, but never really accomplishing anything.”

And that’s exactly what I suggest you do – treat your workouts as a way to put on muscle, and your diet as a way to get rid of fat. While it may not be entirely accurate, pretending that it is will often give you much better results in the long run.

7. Can Full Body Workouts Get You Ripped?

Full body workouts can certainly play a part in getting you ripped. That’s because being ripped involves more than simply having a low level of body fat.

But, as I mentioned earlier, it’s your diet that will do most of the heavy lifting as far as losing fat is concerned.

Exercise can make you fitter, healthier, happier, stronger and more muscular. But, if you don’t get your diet right, it’s not going to make you any leaner.

But they’re not going to help you lose fat if your diet isn’t set up properly.