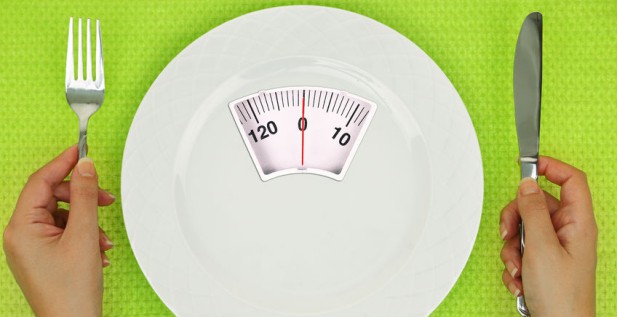 Here’s a comment that rolled in the other day:

Christian, there was a study that recently came out that showed regardless of how many calories you are at breakfast, your body burned more of them up during digestion and less at night. So it does appear that eating a big breakfast helps from the standpoint that more of those calories will be burned for energy and less stored as fat…

This is a nutrition study that did the rounds back in February, generating headlines like:

“A big breakfast may help you burn double the calories”

“Eating a big breakfast burns twice as many calories as a big dinner, study finds”

When I looked at the study for myself (as opposed to simply copying and pasting the press release), it does show that diet-induced thermogenesis – the energy cost of digesting and processing the food you eat – was around 2.5 times higher when a meal was eaten in the morning compared to that same meal consumed in the evening.

Which sounds like it matters, but only until you dig deeper into the results.

You can see this for yourself in the figure below, which shows the average diet-induced thermogenesis (including all time points of measurement as well as high- and low-calorie meals) after breakfast versus dinner. 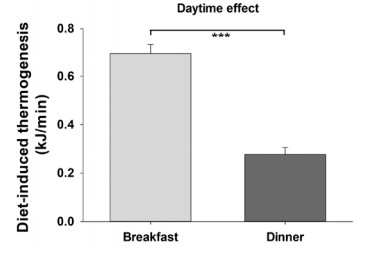 After crunching the numbers over the 3.5-hour post-meal measurement period, the difference between a meal consumed in the morning and one consumed in the evening was roughly 84 kilojoules.

In other words, eating a big breakfast burned an extra 20 calories compared to the same meal consumed at dinner.

Given that a pound of fat contains around 3500 calories, it’s going to take a very long time before those extra 20 calories manifest themselves as an increase in the rate at which fat is lost.

Losing fat and keeping it off is more about building habits and routines that work for you than it is about basing what and when you eat on small differences in diet-induced thermogenesis.

If you find it easier to stay within your calorie budget for the day with a big breakfast and a small dinner, go for it.

But if breakfast isn’t your thing, or you don’t get peckish until the afternoon, there’s nothing wrong with starting the day with a cup of coffee and little else.

As long as a few nutrition boxes are being ticked, the way you distribute your calories over the course of the day is down to personal preference, and won’t have a great deal of impact on your results one way or the other.

If you want less flab and more muscle when you look down at your abs (or where they should be), check out The Flat Belly Cheat Sheet.

It’s a “cut the waffle and just tell me what to do” PDF that tells you exactly how to get rid of belly fat. To get a copy of the cheat sheet sent to you, please click or tap here to enter your email address. 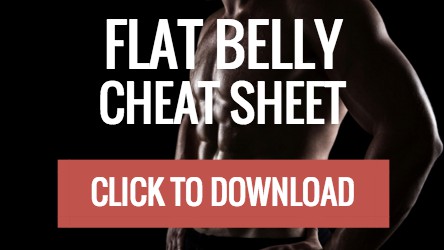