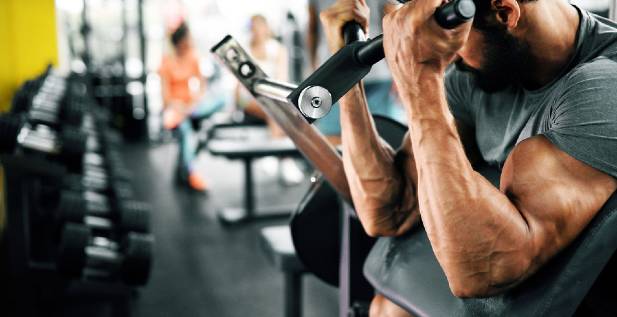 If you want to know what the science says about blood flow restriction training and muscle growth – what it is, how it works, and how to get many of the same benefits without faffing around with cuffs, bands or tourniquets, this page will show you how.

Some years back, I decided to take up tennis.

Although I love playing the game, it can be brutal on your joints. I ended up with tennis elbow in both elbows, as well as problems with my left knee.

It would swell up whenever I played a match, and caused a lot of pain whenever I did anything more vigorous than walking. Even just sitting down for long periods was painful.

At first, I thought that simply resting for a few weeks would solve the problem, but it didn’t.

So, I decided to take an aggressive approach, and tried everything – short of cortisone injections and surgery – to get things sorted.

Friction massage… icing… stretching… contrast hydrotherapy (the alternating application of heat and cold)… none of it made any difference.

At this point, I feared that I’d had it. Tendon pain can hang around for months, if not years. For some people, it never goes away.

Plan A hadn’t worked. Neither had plan B. Time for plan C.

Rather than try to get rid of the pain, I decided to work around it, and got back in the gym to see what I could do that didn’t hurt.

Blood flow restriction training – which you might see referred to as BFR training, tourniquet training, vascular occlusion, or some other variation on the theme – was one of the things I experimented with.

What Is Blood Flow Restriction Training?

The video below shows a guy using blood flow restriction training on his biceps if you want to watch:

The aim is to wrap the limbs tightly enough to restrict the flow of blood away from your muscles, but not so tight that you stop it getting in [1]. You want blood to be flowing in, but not to get out.

This has a number of effects.

For one, you’re going to get a massive pump. Blood is coming into a muscle faster than it can leave. As a result, there’s a temporary pooling of blood in the occluded limbs, which is what gives you that “pumped” sensation.

Because the flow of blood away from that muscle is restricted, there’s a buildup of metabolites that would normally be cleared away, a phenomenon known as metabolic stress [2]. Your muscles are going to start burning a lot sooner than they otherwise would do.

Although it involves lifting very light weights, blood flow restriction training has been shown to trigger faster gains in muscle size compared to the same amount of training done using heavier weights and without the use of a tourniquet.

Let’s say you train your biceps.

You wrap a tourniquet around the top of one arm, pick up a dumbbell that’s around 50% of your maximum, and start curling. You keep going until you can’t do another rep.

Then you do the same number of reps with the same amount of weight on the other side, this time without the tourniquet.

After several months of training, the arm with the tourniquet will end up bigger than the arm that was trained without blood flow restriction.

In fact, when Japanese researchers ran a study along the lines of what I’ve just described, the cross-sectional area of the biceps trained with blood flow restriction increased by 20% [3]. The arm that was trained without the use of a tourniquet grew by just 7%.

One of the main theories centers on the idea that slow-twitch muscle fibers, which are normally recruited when you train with lighter weights and higher reps, are fatigued more quickly than normal.

As a result, the fast-twitch muscle fibers, typically reserved for heavier efforts, are called into action that much sooner.

In other words, a greater number of muscle fibers are being recruited and stimulated, which ultimately leads to those fibers (and your muscles) getting bigger.

In fact, blood flow restriction training has been shown to increase anabolic signaling and muscle protein synthesis to a similar extent as heavier training [4].

At this point, I should make it clear that blood flow restriction training hasn’t been shown to work any better than simply training with heavier weights, but not restricting blood flow.

In one trial, Japanese researchers looked at how blood flow restriction training compared to lifting heavier weights [5]. After six weeks of training, it was the group using the heavier weights (75% of their one-rep max) that gained the most muscle.

Even subjects who combined two days a week of blood flow restriction training with one day a week of heavy training didn’t see faster gains than the group who trained only with heavy weights.

Why does that matter?

Because blood flow restriction training leads to muscle fatigue being reached earlier in a set, you won’t be able to do as many reps.

So when you do the same amount of training – same number of sets and reps with the same amount of weight – but without the tourniquet, the level of metabolic stress is going to be that much lower. As a result, there’s less stimulus for growth.

Blood-flow restriction training gets a lot of love these days, with claims that it’s going to grow your arms like crazy, give you amazing pumps, reduce the wear and tear on your joints, send your growth hormone levels through the roof and generally turn you into an enhanced and more amazing version of your current self.

And it certainly has its benefits.

Blood flow restriction training is useful for working around knee or elbow pain. You can train your arms and legs using very light weights, while giving your joints a break from heavy lifting.

However, blood flow restriction training isn’t the only way to stimulate metabolic stress [6]. There are some effective alternatives that work in a very similar way, but don’t require the use of specialized (and expensive) pressure cuffs, bands or wraps.

For one, you can get similar benefits to blood flow restriction simply by training with lighter weights and higher reps in the 20-30 range.

The weight is still light enough to ease the strain on the joints, but not so light that you have to do endless reps to get a training effect.

Studies to compare blood flow restriction training with light weight, high rep training taken to failure, but without any restriction, show that both methods lead to the same amount of muscle being built [7 , 8].

In fact, there are multiple studies to show that lighter weights and higher reps do a surprisingly good job at stimulating muscle growth, which I talk more about in the link below:

High Reps vs. Low Reps for Muscle Growth: What the Science Says

You can also shorten the rest period between sets to 30 seconds or so, rather than a couple of minutes. Just like blood flow restriction training, this is an effective way to stimulate muscle growth with the use of relatively light weights [9, 10].

What’s more, wrapping a tourniquet around your arms or legs isn’t the only way to restrict blood flow. You can get a similar effect by not allowing the muscle to relax during a set.

How do you go about doing so?

One option is the constant tension method, which involves slowing your lifting speed, minimizing any pause at the top and bottom of each rep, and trying to keep your muscles under tension the whole time.

In the top position, they paused for approximately one second. They didn’t pause at the bottom of the movement, and moved straight from the lowering to the lifting phase of each rep.

This “constant tension” protocol worked just as well for building muscle as heavier weights and faster lifting speeds. It seems to work in a similar way to blood flow restriction training by increasing the buildup of metabolites and ramping up metabolic stress.

Something else that works well is the no-lockout method. This involves doing partial reps in the mid-range of an exercise. Essentially, you’re stopping a movement just short of full ROM, not locking out each rep, and staying in that middle range,

There was an interesting study I came across in the Journal of Strength and Conditioning Research, where the skull crusher exercise, performed only through the middle range of motion, led to a faster rate of muscle growth than the same exercise done through a full range of motion [12].

The researchers think that the constant tension restricted blood flow by compressing tiny blood vessels, known as capillaries, inside the working muscle.

This partial range-of-motion “constant tension” method is best-suited to exercises like skull crushers, dumbbell flyes or preacher curls, where it’s difficult to keep tension on the target muscle through the full range of motion.

Blood flow restriction training is an effective way to build muscle while using weights that are far lighter than what you’d normally need to get the same benefits.

It’s useful for training around injuries to the knees and elbows, and can also limit the loss of muscle mass during recovery from surgery.

However, blood flow restriction training isn’t the only way to generate higher than normal levels of metabolic stress.

You can get much the same effect by training with lighter weights and higher reps, reducing the amount of rest you take between sets, or minimizing the opportunity a muscle gets to relax during a set by keeping it under constant tension the whole time.