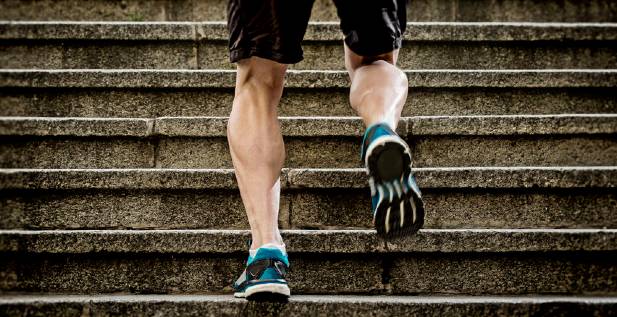 Not long ago, I was putting together a training program for a guy who hadn’t been to the gym for a couple of months.

He’d lost some muscle, and was on a mission to get it back as fast as humanly possible.

Not only that, he also wanted to get a lot fitter, but without interfering with muscle growth. He had four days a week to train, and wanted my help to make sure that his program was set up properly.

Some folks take the view that this can’t be done. If you want to maximize muscle growth, they say, cardio should be kept to an absolute minimum.

How much cardio, if any, should you do when you’re trying to build muscle? At what point does it start causing problems?

Much of the concern about mixing cardio and resistance training started back in 1980, when a researcher by the name of Robert Hickson published a paper titled Interference of Strength Development by Simultaneously Training for Strength and Endurance.

Hickson was a powerlifter, who’d been doing his post-doctoral work in the laboratory of Professor John Holloszy. Seen by many as the father of endurance exercise research, Holloszy would go for a daily run through the local park.

Wanting to make a good impression with his new boss, Hickson joined in with the afternoon runs.

However, despite the fact he was still doing the same amount of strength training, Hickson found that his muscles were shrinking and he was getting weaker.

When Hickson told his boss what was going on, Holloszy told him that “this should be the first study you do when you have your own lab.”

When Hickson moved to Chicago, and opened a new laboratory at the University of Illinois, that was exactly what he did.

In his study, Hickson found that subjects who combined resistance and endurance exercise gained less strength than those who lifted weights and nothing else [1].

However, the training program Hickson devised was not for the faint of heart. The quads were trained five days a week with squats, leg presses and leg extensions, for a total of 30 work sets per week.

The endurance side of things was equally brutal. It involved interval training (a total of six 5-minute bouts at a work rate approaching VO2max) on an exercise bike, three times a week.

On the other three days, subjects were told to run “as fast as possible” for 30-40 minutes.

There were no recovery days. No easy weeks. It was pretty much flat out for the entire 10-week study.

How Does Cardio Interfere With Muscle Growth?

Cardio does have the potential to interfere with your gains, especially if your training program looks like the one Hickson had his subjects doing back in the day.

It does so in a number of ways.

First, cardio can compromise the “quality” of your workouts, which in turn reduces the strength of the muscle-building stimulus generated by a given training session.

For example, let’s say you go to the gym, do a hard HIIT session on the bike, then train your legs immediately afterwards.

Chances are it’s not going to go well.

You won’t be able to do as many reps, or lift as much weight, because of the residual fatigue from the HIIT. As a result, the intensity of the “growth signals” sent to your muscles will be weaker than they otherwise would be, which in turn means a slower rate of muscle growth [2].

Cardio can also interfere with your ability to recover from a workout.

Let’s say, for example, that you’re following a 5×5 program. You lift weights on Monday, Wednesday and Friday, then rest on the other days.

Adding cardio on several of your rest days means that some of the resources used by your muscles to recover and grow are now spread more thinly than they were before. This can bring your gains to a halt, or at least slow them down considerably.

Cardio may also mess around with some of the molecular signalling pathways involved in hypertrophy [5].

That is, the strength of the “make me bigger” signal being sent to muscle fibers in the hours and days after training is going to be reduced, slowing the rate at which muscle protein is synthesized.

However, saying that cardio has the potential to put the brakes on muscle growth doesn’t mean that it will, and the extent to which cardio interferes with your gains depends on a number of factors.

How Much Cardio Should You Do?

There are four main training variables that you can tweak and play around with. Those variables are frequency, intensity, time and type.

What you do to one changes what happens to the others.

Let’s say you turn frequency up to the max, and decide that you want to do some form of cardio every day. In that case, you’ll need to play around with the intensity, time, and type of exercise you do to avoid killing your gains.

On the flip side, a reduction in training frequency allows you to ramp up the intensity levels, as well as giving you more choice about the type of cardio you do. You might find that running five days a week, for example, is too much for your body, but 2-3 days a week is fine.

There are no strict rules that lay out exactly how much cardio you should do and when you should do it. But I do have some general guidelines that will minimize the extent to which cardio interferes with your gains.

1. First, cap the amount of moderate- to high-intensity cardio you do to a maximum of 40 minutes, three days a week.

2. Avoid any intense cardio immediately before lifting weights. You’re better off doing it once the heavy training is out of the way, or even on a separate day.

3. I’d also suggest that you focus mainly on low-impact cardio, such as cycling, swimming, rowing or even incline treadmill walking, rather than running.

Let me give you a few examples of how to put it all together.

The first option is to do some form of low-intensity cardio, such as walking, every day.

While it’s not going to have much of an impact on your cardiovascular fitness (unless you’re completely out of shape), it is going to change your health for the better. A brisk walk first thing in the morning is also a great way to clear your head and set you up for the day.

Option two is 30-40 minutes of moderate-intensity (60-70% of maximum heart rate) cycling 2-3 times a week, on the days you don’t train with weights.

Interestingly, there are a few studies to show that the addition of cycling to a resistance training program improves rather than impairs gains in muscle size [3].

If you want something that doesn’t take up as much time, go for HIIT. This can be done on separate days, or even after you’ve trained your legs – the stimulus isn’t that much different from doing a few burnout sets of squats or leg presses.

When it comes to improving cardiovascular fitness, most studies show that HIIT is superior to steady-state cardio, on a time-equated basis at least.

After warming up for two minutes, the participants pedaled fast for three 20-second intervals. Each interval was followed by two minutes of slow pedaling. The workout finished with a three-minute cool-down.

From start to finish, the workout lasted 10 minutes. Only 60 seconds of that time was spent working hard.

The study participants were asked to rate how hard they were working on a 20-point scale (where 20 is maximum exertion). They rated it 15 out of 20. In other words, the intervals were hard. But they weren’t a maximum “all out” sprint.

By the end of the three-month study, subjects in the continuous group had ridden for 27 hours. However, the interval group spent a little over five hours on the bike.

Despite a five-fold lower time commitment, various measures of cardiometabolic health improved to a similar extent in both the HIIT and steady-state groups.

VO2 peak, a measure of aerobic fitness, increased by 15-20% in both groups. Insulin sensitivity, a marker of blood sugar control, improved to a similar extent in both groups. Muscle mitochondrial content also increased similarly after HIIT and steady-state exercise.

If you’re already very fit, this type of program isn’t going to get you a lot fitter. But it takes less work to maintain a given level of fitness than it does to build it in the first place, and you don’t need a lot of training just to keep things ticking over.

Provided you don’t go overboard on the volume, frequency and intensity, there’s no need to worry about cardio putting the brakes on muscle growth.

Cardio seems to interfere a lot more with the development of power than it does with gains in strength or size.

In fact, some types of cardio may help recovery by promoting blood flow to the muscles without causing further damage.

Cycling at a low-to-moderate intensity for 20-30 minutes the day after a heavy leg workout, for example, will often reduce post-exercise muscle soreness, and may accelerate the rate at which muscle damage is repaired.